So. I go to Goodwill on occasion, looking for small things, and end up coming home with big things...a lot. Too much. But sometimes you see a piece of furniture, and you just have this big idea immediately, like I did with this dopey little cabinet that Goodwill had labeled as a "hobby chest."

I had gone to initially find some small table lamps with funky shapes to paint anew, but I left with this, go figure.

Here, I have the doors unhinged and the weirdo Swiss Cheese look-a-like shelf they had in there taken out. I don't know if the shelf was built for spools of thread or what, but it was janky, and squealed like a banshee, and was utterly useless to me, so it went away (under the basement stairs).

If you look towards the top right of the picture, you can see a piece of it. Like seriously, what is that ever going to be good for?? If you have an idea, please enlighten me, because I'd love to find a purpose for it. 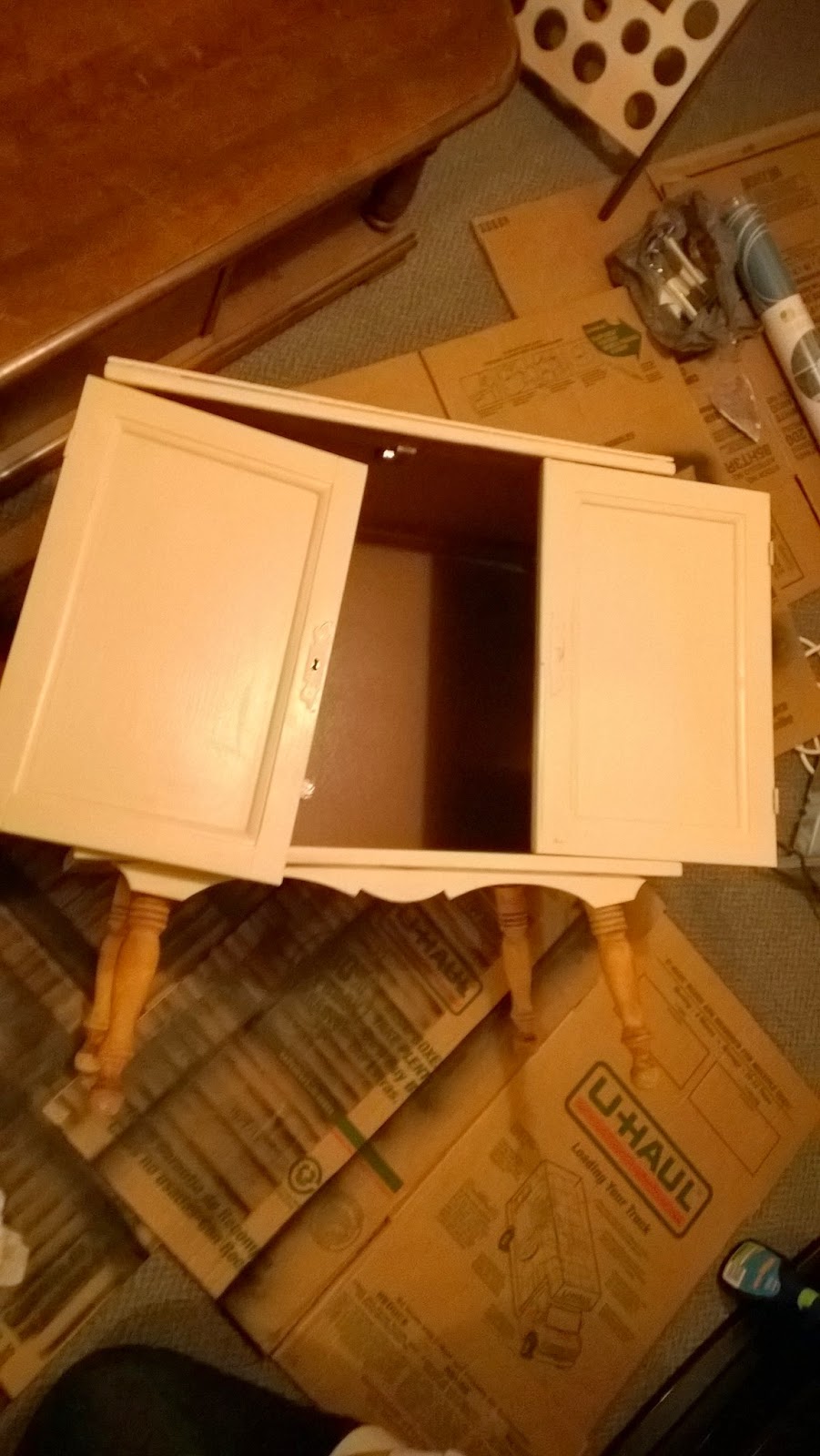 Anyways, I knew it was the perfect size for an entryway cabinet to store porch salt and other unsightly necessities in, so I paid the nice man at the Goodwill register $10.00 and ran away with it.

I made another trip to Target for another random bucket of paint to make this thing not as scary. Those legs are weird. I almost didn't get it just because of the legs. But it came with a little antique lock and key set that I fell in love with, so I thought that if the legs still looked atrocious after I painted them, I could change them out.

I went with a bright white color to make it easier down the road if I ever wanted to paint over it. I'm already getting to that point, and it hasn't even been in its spot for two months. It's just too plain this way.

Anyways (again, getting on a tangent), I sanded the whole thing down (really need to get better at taking step by step pictures for this, huh?), cleaned up the dust, bobby pins, buttons, and nails floating around on the inside, and started painting. 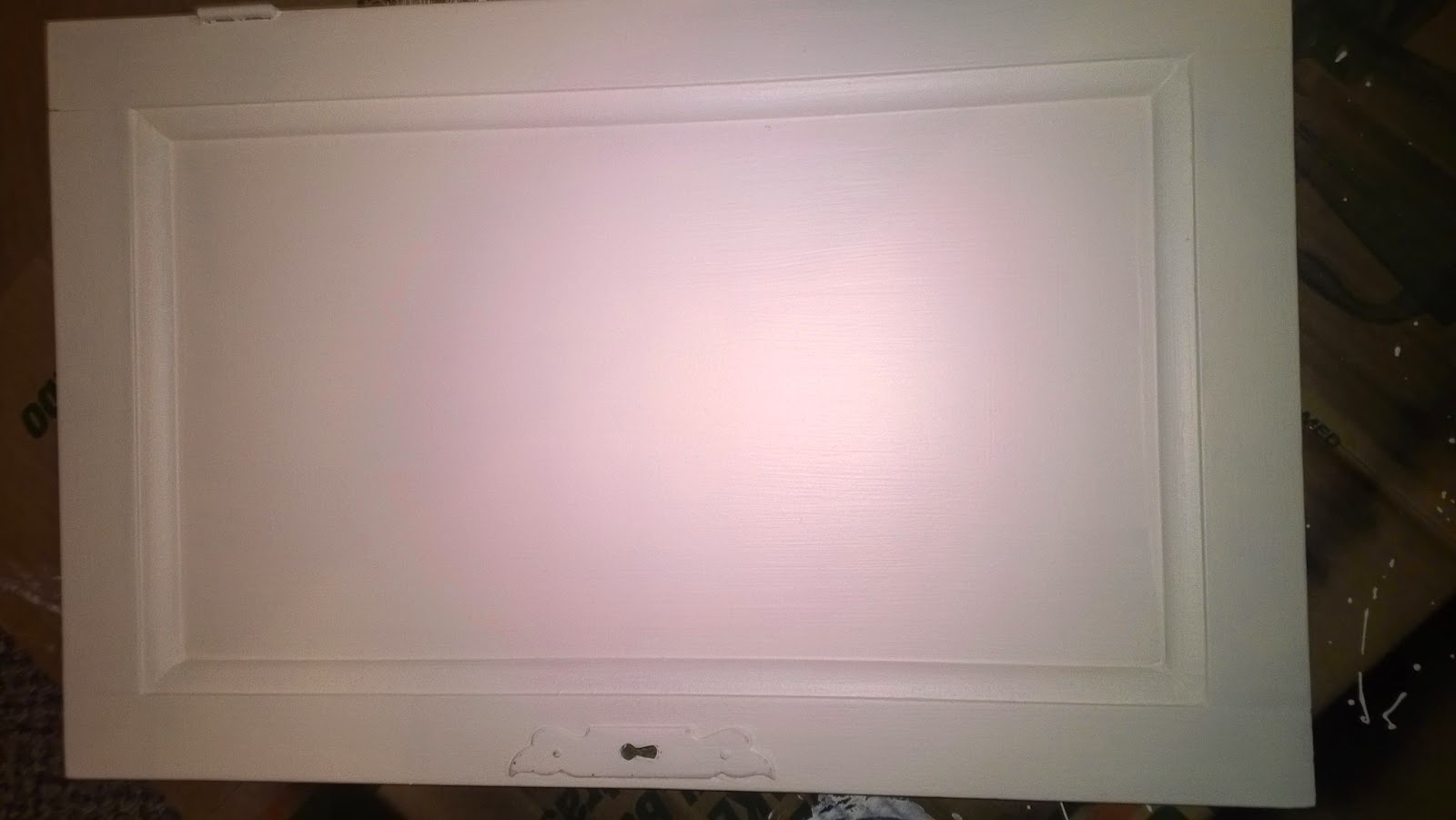 Since the metal for the lock had already been painted over at some point, I ended up doing the same thing. I do eventually want to find a way to remove the paint from the metal, just to see if it has the grey iron look that the key does, but haven't gotten that far yet.

I'm thinking if I put a few strips of painter's tape vertically over/around it, and then Xacto knife the edge so that only the metal is uncovered, it might work. That way the paint stripper doesn't get to the white around the metal, but the metal is revealed. Might be too late, I might ruin it all, but you live and learn, I suppose. 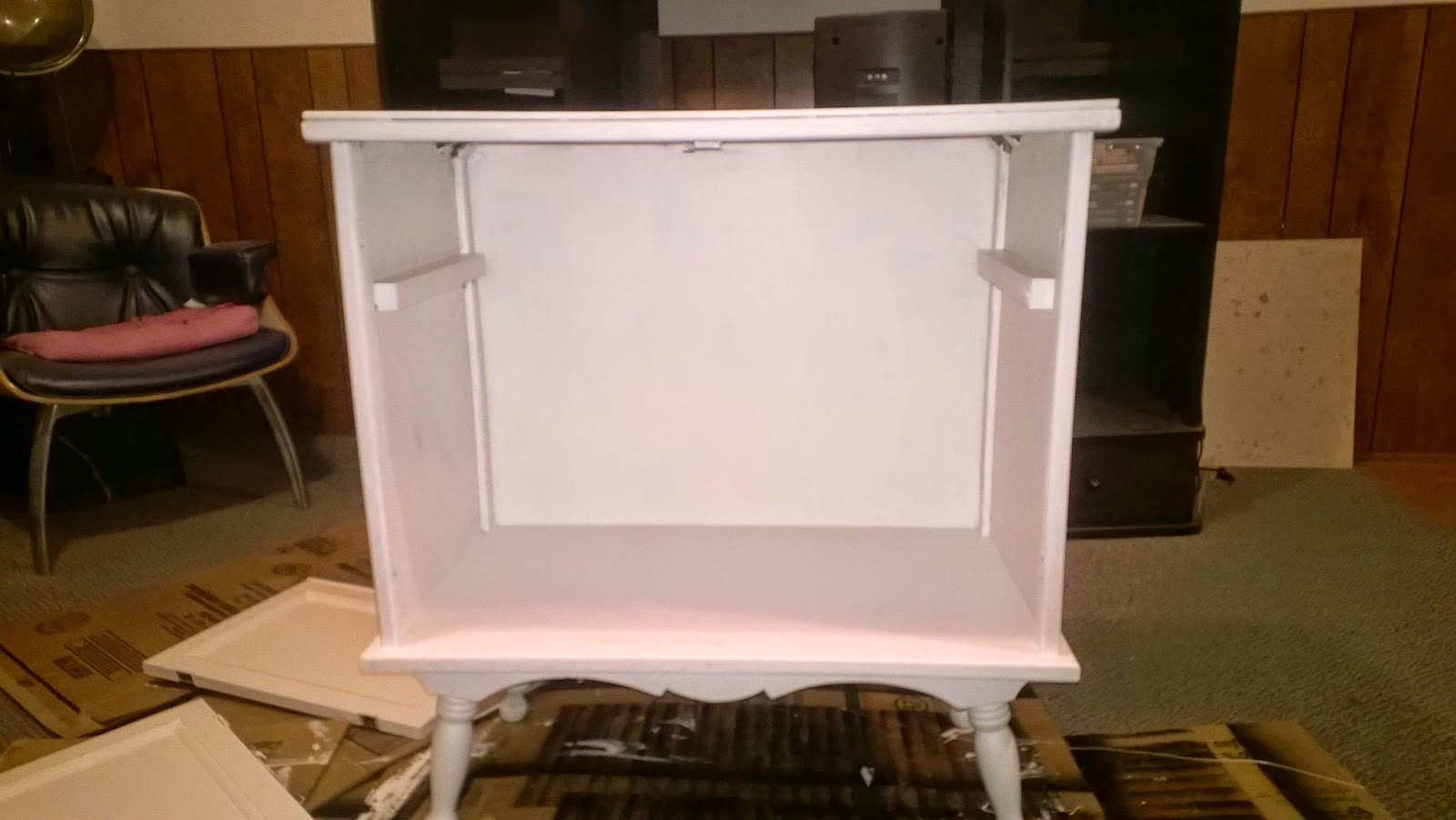 I had toyed with the idea of putting removable wallpaper on the inside for an accent, but that was a little out of my price range for something that would hardly ever be opened. Instead I painted the inside the same bright white.

Boy, did that paint make those legs look better and less awkward! I did notice that the wood is warped, especially on the side of the left door and the top, but it's working for right now. I'm beginning to think that someone seriously just ripped this off of a kitchen wall, crammed legs on it, and used it for whatever they wanted.

Hey- maybe that's what the Swiss Cheese shelf was for- maybe it held cups or something strange.

I left the little wooden strips in there in case I ever wanted to get a small shelf to put in there. I might even eventually put a drawer in it for mail, as I still have the sliders from the Swiss Cheese shelf. Some WD40 might be needed to help with the banshee screech, and then I could have a little hidey spot for all those bills!

So right now, this is the cabinet. Not too sure about how plain it is right now. In fact, I have a roll of textured, paintable, damasque wallpaper in the basement that I'm thinking about putting on the inner detail portion of the doors to add a bit of interest, but still... that white! 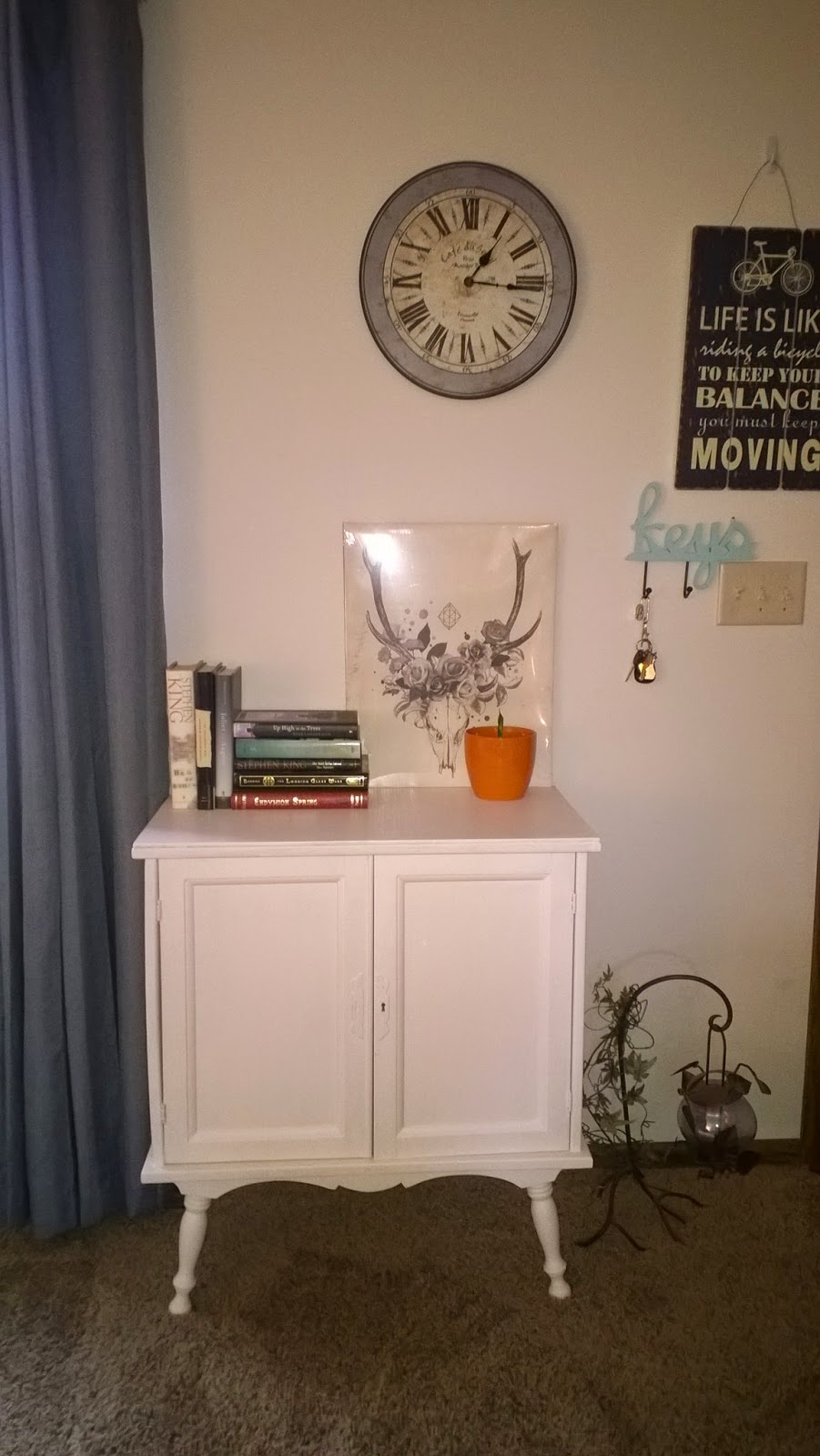 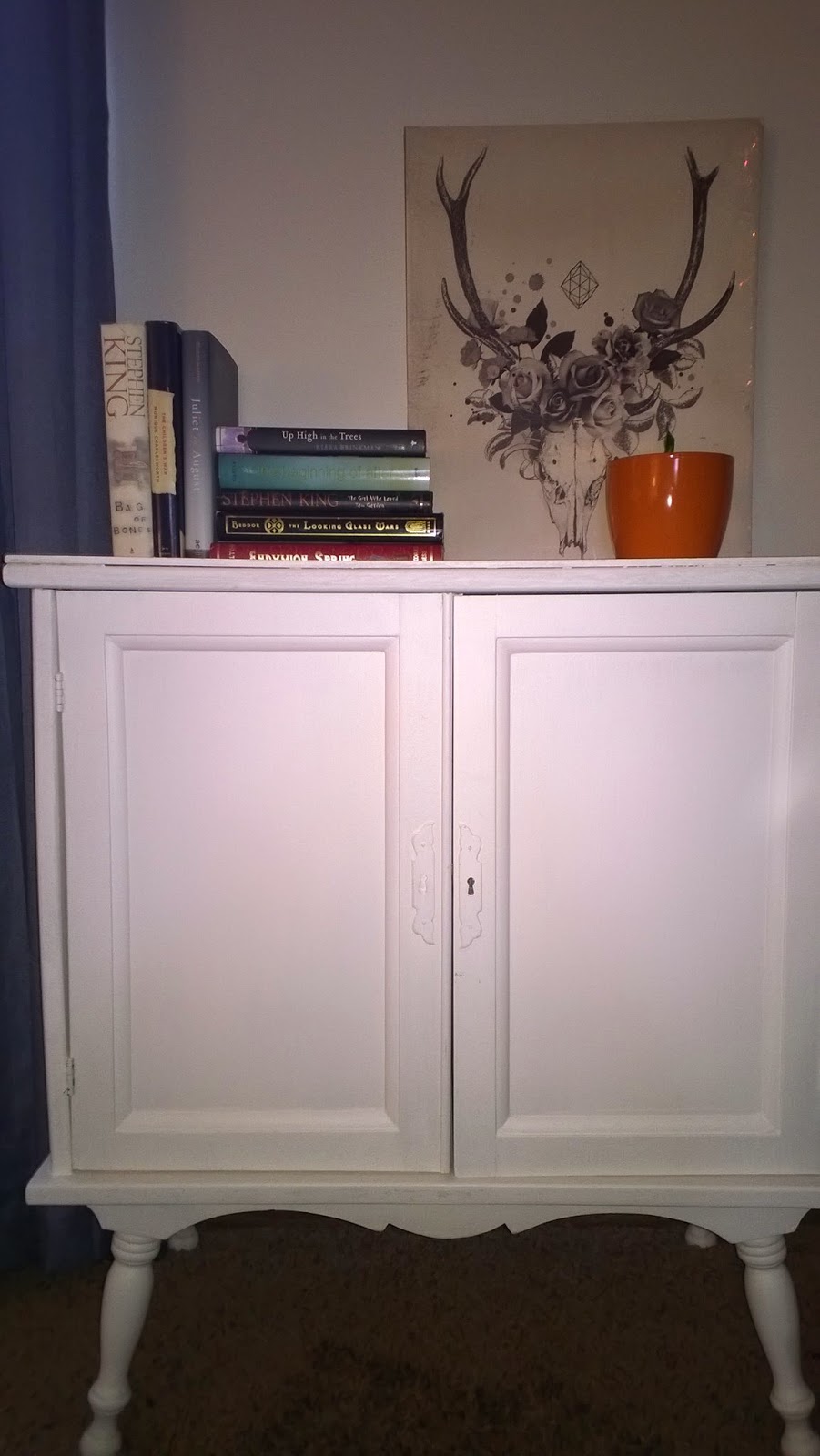 Any color suggestions? I have a lot of grey-ish blues throughout the living room if that helps. Soon I'll post an update on the doors when I get around to putting that wall paper on the front.

But until then, This thing is just going to stay where it's at! I did change that wall, by the way- and what the cabinet has on top. This is what it looks like in the house right now: 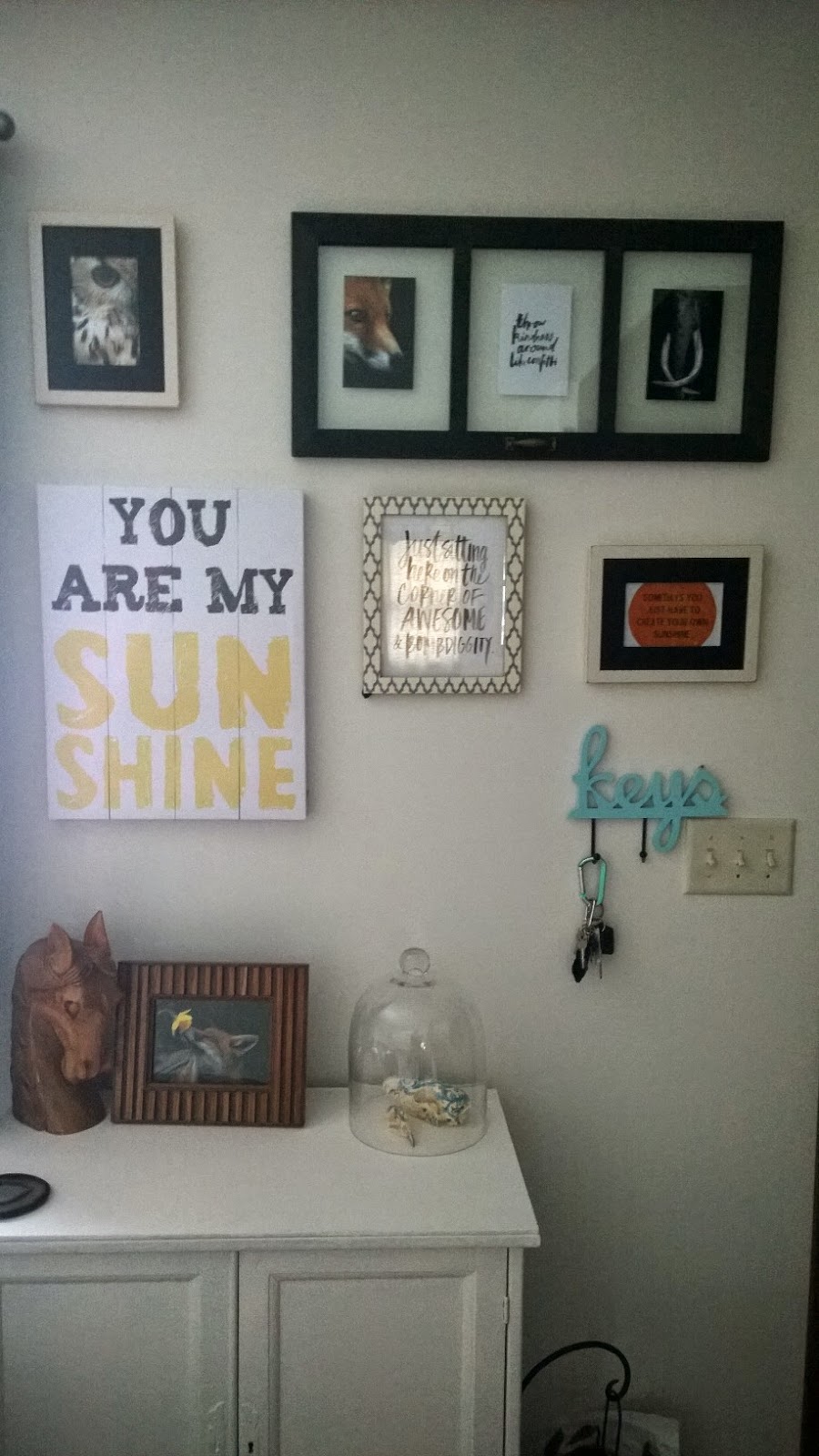 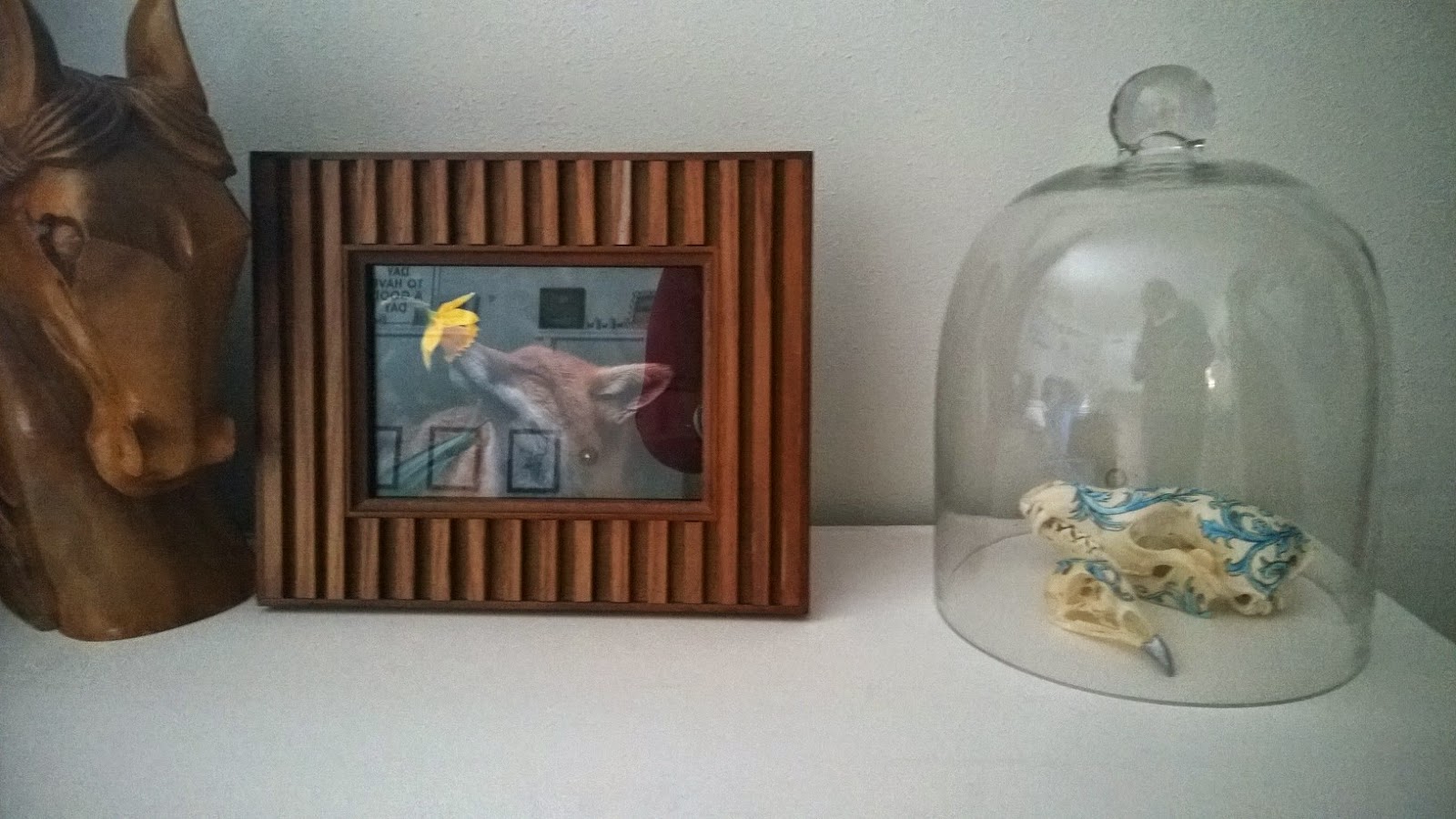 And no, I'm not in the mafia. The horse head was a white elephant gift from my friend Leah, and I don't absolutely hate it, so it's hanging out with the frame it matches.

But seriously- paint color suggestions?? Put them in the comments below please!! Thanks!
-Lex