So my friend Hannah is an artist, right? Well I tend to make her do projects for me in exchange for high fives, car rides, and Chinese food. And sometimes, I don't have a frame for them. Like these beauties: 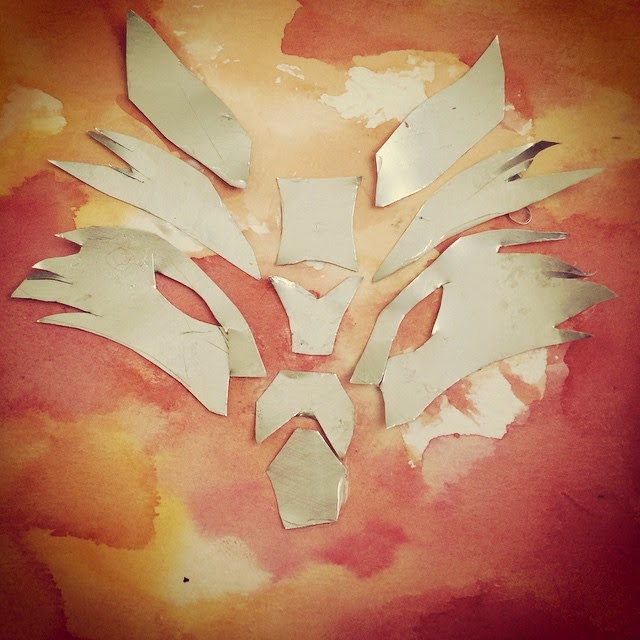 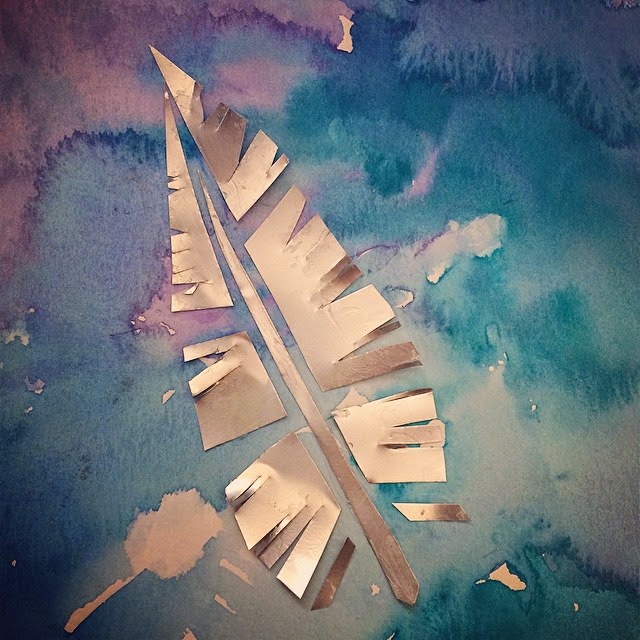 One day at work, we were chit chatting about a pin I had found on Pinterest. I can't seem to find the pin right now, but I can kind of describe it. There were curtains as the main focal point, but off to the left hand side, there was a small picture frame with metallic feathers inside. And that's all it took for me to fall in love with the idea of creating simple shapes with old aluminum cans.

We talked about it for a while, doodling out ideas. After that day, I didn't really think about it. But one day, Hannah just went and created those lovely little watercolor and aluminum pieces for me. For a first time experiment, I think she did pretty dang well! The feather is my favorite, colors and all, but the fox is definitely a close second.

Well, anyways, I didn't have frames for these guys! And let me tell you, finding a frame that will fit 6" x 6" images is way harder than it should be. But one day while we were strolling through Michael's, I found these clearance frames. 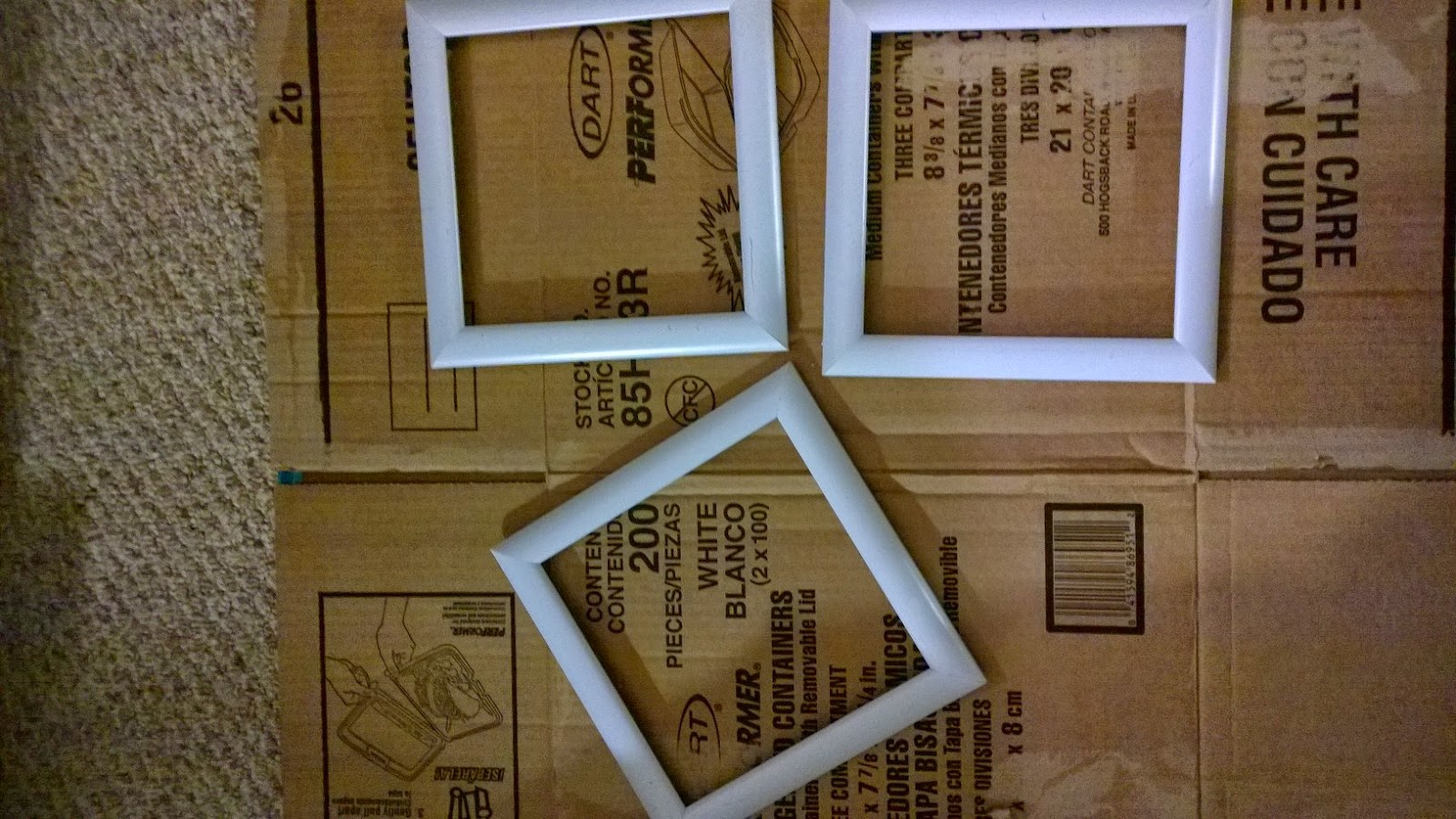 They were scratched, slightly dented 10" x 10" frames, and they were white (talk about easy to dress up). And the best part? They were only $4 a piece!

I scooped these bad boys up and brought them home, where they sat packed away for the past couple of weeks. While unpacking some goodies downstairs, I came across this long forgotten can of paint from a somewhat failed DIY project. 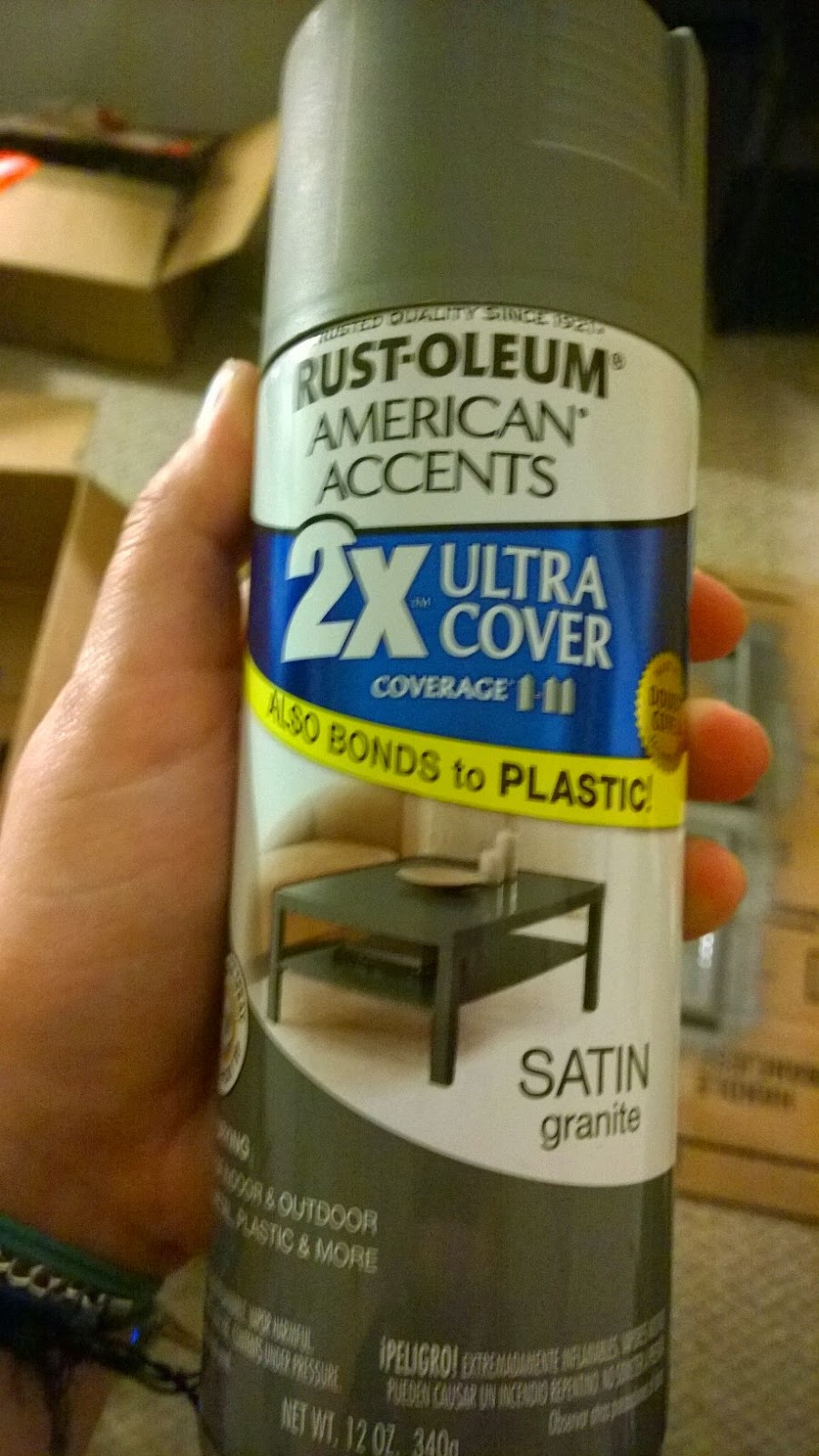 I knew that this grey would be perfect for this project. It was simple, but would complement the silver of the aluminum, while still matching other pieces in the house. So off I went to find a cardboard box to lay on the ground, and then I started working.

Getting the glass out was way more difficult than I ever could have anticipated. The securing pieces on the back of the frames are the kind that you have to pry upwards, and they were not ready to let go, let alone become flat on the sides so that everything just slid out nicely.

There were many times I was worried the glass would crack while I was wrestling it out of the frames. But eventually I had the glass out of all three, and I could start painting. The first coat was kind of blotchy and weird, so I coated them again later on in the evening. I did this project while I was doing other spray paint projects, so the entire house smelled terrible (too windy to leave everything outside).

Here's a work in progress shot. Blotchy, wet, and all around unimpressive, right? 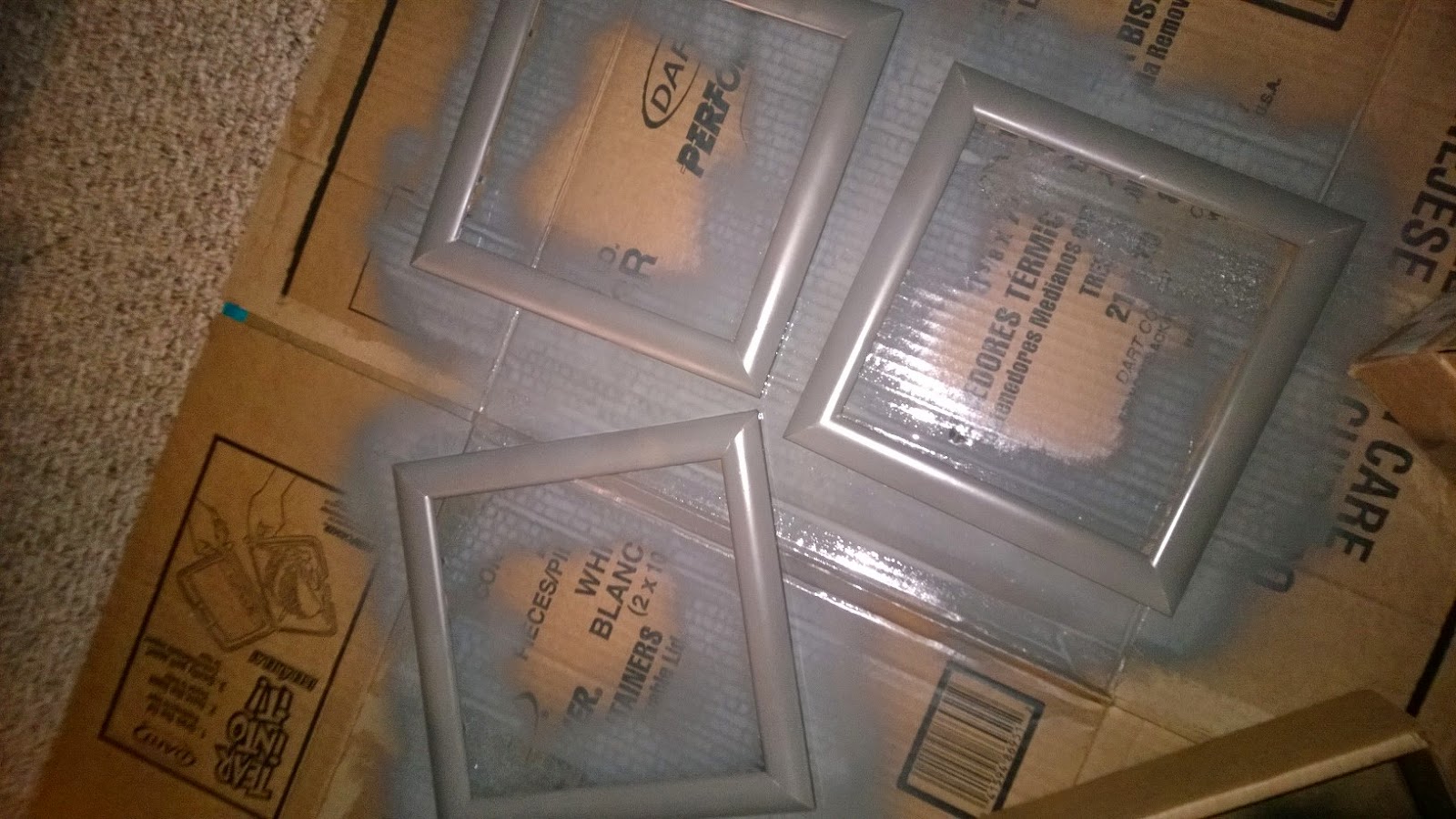 Well here's a finished product shot, with Hannah's art pieces included. Now I just have to figure out where I want to hang these beauties! I have so many things up on the walls in the office already, so these might end up in the bedroom or the rec room once things are more settled and put together.

Any suggestions on where I should hang these guys? 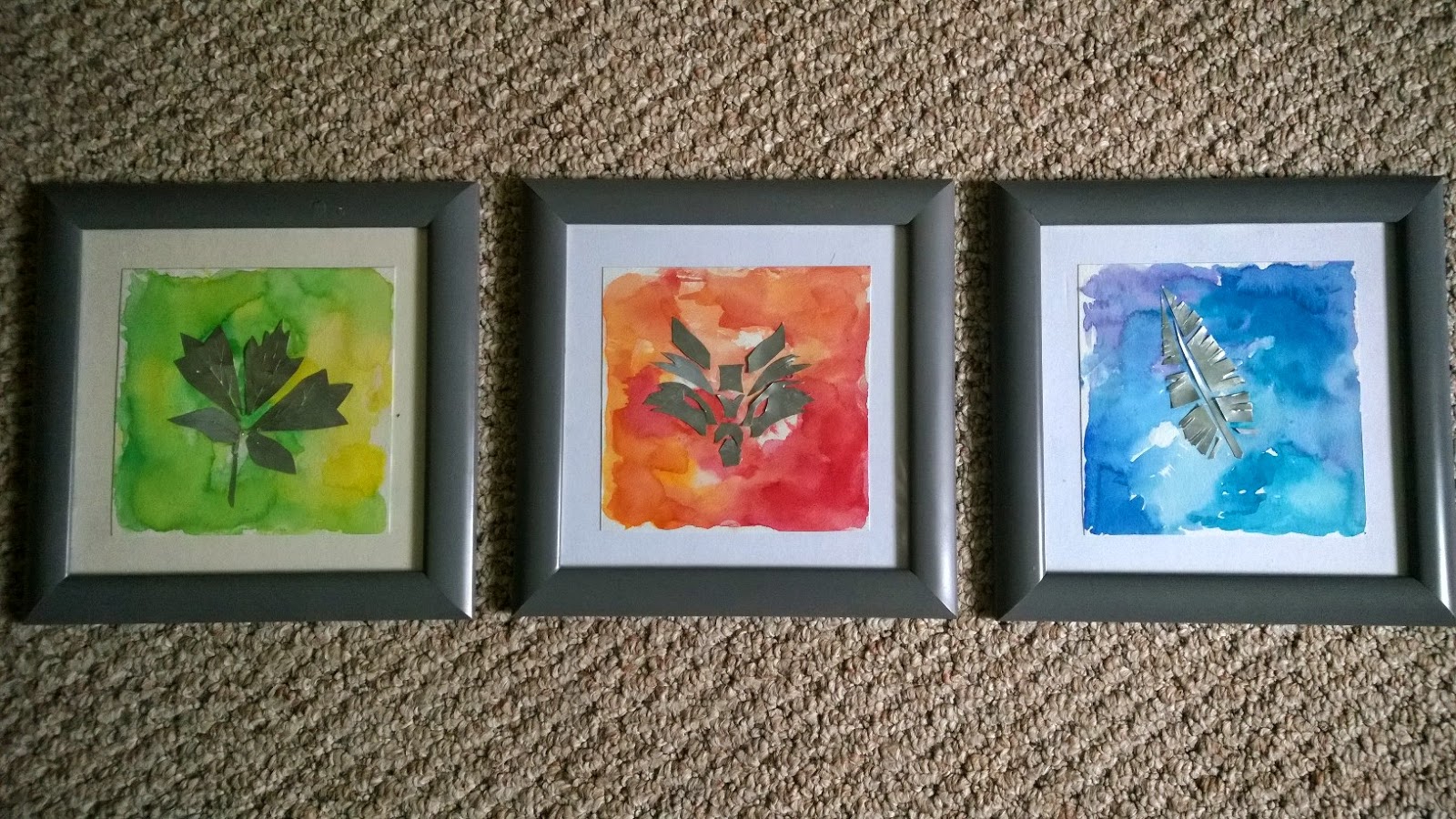