This is a project I've been waiting to try for far too long. I saw this technique a few years ago on Pinterest, and just haven't found a piece to try it on until now.

A few weeks ago, I picked up this little bread box for $3 at Salvation Army. While it wasn't hideous, and it honestly could have been left alone in someone else's house, this is my house. We know better than that. Nothing gets left alone. Nothing makes it out of my clutches without something being changed these days. 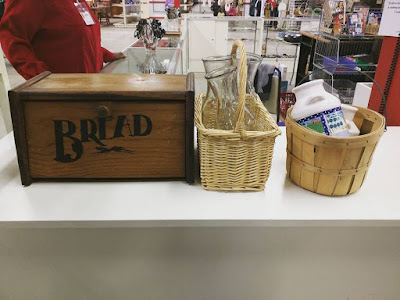 The original plan was to keep the original typography & whitewash the wood using paint & water. After that plan took a quick nose dive into the realm of the impossible, I decided to paint & antique it, later giving it a new logo on the front using the "Wax Paper Image Transfer" technique. 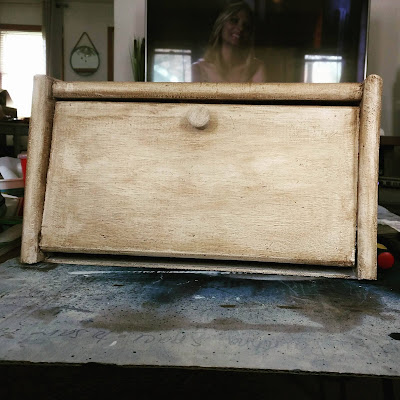 I created a logo in Photoshop, edited it for size, flipped it, and got to planning. 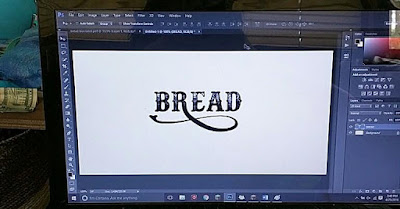 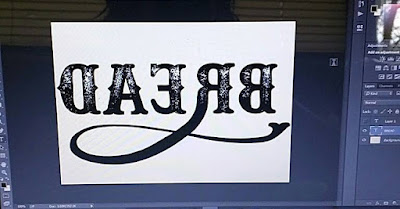 Print your reversed image on wax paper, put the ink side down on your piece, rub the wax paper with a flat edge, and badda-bing-badda-boom, you're done. Image transferred. 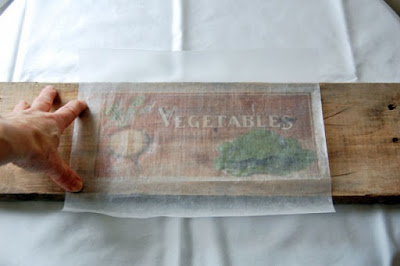 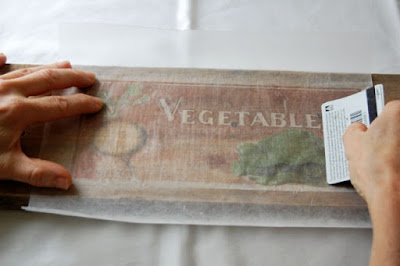 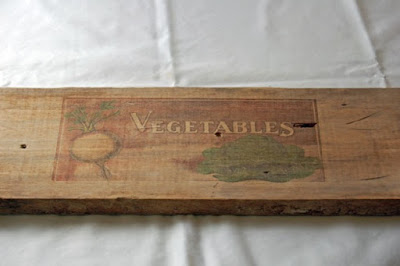 
What a lot of them don't tell you is that you have to be one lucky SOB to get this to just work right away.

First of all, you need to have an inkjet printer; laser printers will not work. Okay, no worries, our printer is an inkjet. 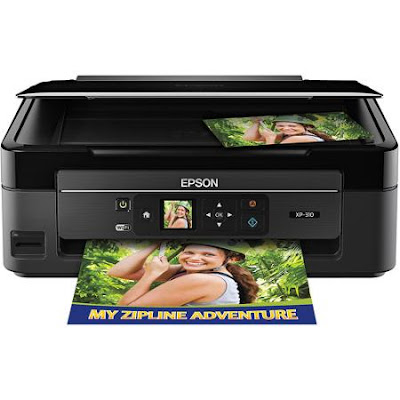 Second of all, your printer might have the attitude of a two year old that hasn't napped in three days and just stepped on a Lego. I know mine did. I tried several different ways to get my printer to grab the wax paper in order to print.

I tried putting the curled up end facing me.
I tried putting the curled end facing the actual paper behind it.
I tried taping the wax paper to a sheet of regular paper.
All three ways failed.
The wax paper would get crumpled up in seconds, get halfway through the printer (without printing), and then it would yell at me and tell me that the paper was out. It was incredibly frustrating.

Then I found this video. I thought, okay, I'm doing something really simple that's messing this all up. Maybe I'm missing a step. Nope.

Hers just flies through beautifully- in a cheaper printer, no less! She does have an excellent tutorial at the link on how to create your images using free software- I used Photoshop, which I know not everyone has access to. If you're going to try this method, and need to know how to reverse the image, check her page out for sure!

I came to the conclusion that this technique was nothing but a lie, or a truth that I was just not destined to live. So in came the crazy. I tried everything else I could think of:

At the end of it all, I just had several printouts soaked in various liquids, and a ever naked bread box. 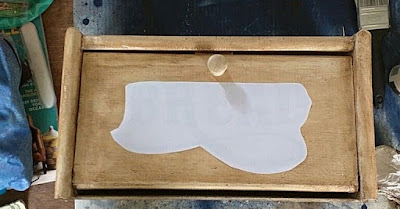 Can you say "Over. It." I just want this to work! We'll be trying some other methods tonight to see if I can't get this technique to work just yet. I am determined, but Hannah came up with a back-up plan that might work as well.

Either way, we will have a complete tutorial on how to transfer images (just in case you've tried this technique and gone through the same frustration)! Stay tuned for our second installment, "Image Transfer Tutorial - Part 2 - Victory is Ours" ;) It'll include several free printable labels for your kitchen!