Alright, I know I haven't done a reveal on the Craigslist dresser yet... I haven't been able to get a good daylight picture of it, and it's in a weird corner of our bedroom because it doesn't fit where I originally wanted it (by less than an inch...go figure).

You can kind of see how weird our room currently is in this video of Aaron whistling under the covers so that Sarabi attacks him. She absolutely hates whistling, and will dig for what feels like forever until she can head boop your mouth to plug it with her forehead.

So today we're talking about our second bedroom, aka my office & separate living space (you can see an "in-progress" post here. Feel free to ignore the absolutely terrible quality of those pictures. I took them at night- what was I thinking?

This space is used when Aaron is playing video games on our big TV, has a hoarde of friends over, or I'm just not feeling the whole "go up & down stairs every time you need to use the bathroom" thing we have going on.

It had several pieces of mid-century furniture to begin with, but I wasn't fully committed to the look, as I hadn't run into enough pieces for me to be able to call this my MCM room. It was definitely inspired, but I needed my main piece to be perfect.

While my old $5 credenza worked really well as an entertainment center, it was huge (71" wide), it was heavy (easily 200#s), and it wasn't being used to its full potential. Though it was great for binge watching Bob's Burgers, it needed a new home. 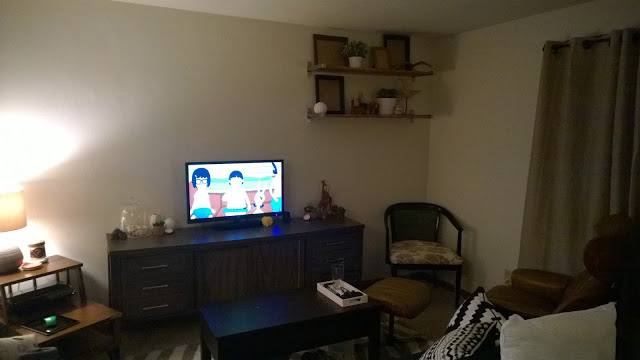 I bequeathed it unto my mother, as it was simply designed, matched a lot of her current decor, and had a file drawer, which I knew she'd use. It worked perfectly with our smaller TV, so I knew it'd be great for hers as well. 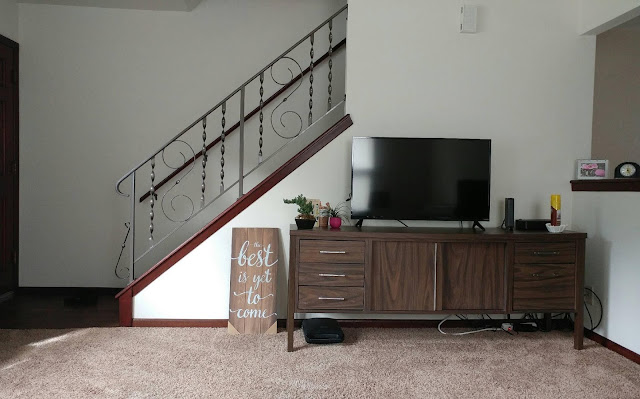 Yay for still keeping it alive! For $5 this thing was quite the steal. It was in excellent condition, had all its parts (except on metal bar on the right hand door), and was super versatile. And it's easily from the late 60s, early 70s. It even had paperwork in it from an insurance agent from 1988 (did you know that losing your hand was worth less than losing a testicle back in the day?? What's with worker's comp?), which was interesting & weird all at once.

Yet I longed for something more. I wanted something slightly smaller, lighter weight, and more of the MCM style I'm so in love with.

I wanted a long & stout mid century dresser to replace the Target dresser we have. This dresser was a great starter, and one of the few new pieces of furniture I own, but ultimately, it's not built to last, and some of the drawers are already saggy from the weight of jeans & shirts after less than 2 years. 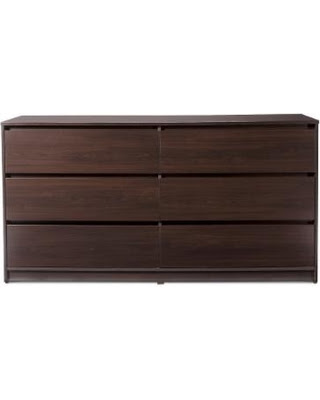 I liked having this much storage, so I also wanted six drawers, preferably all the same size if I was going to be paying for the piece. If it was free & in good condition, though, drawer size would be 100% negotiable.

Enter this curbside treasure I came across yesterday, not even a block away from home (someone was listening when I wished aloud): 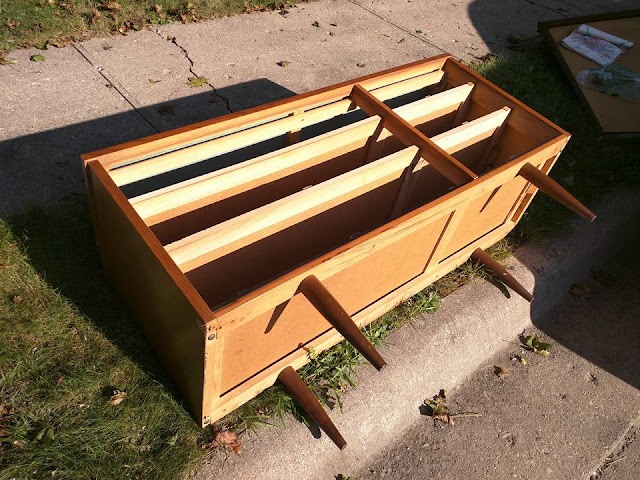 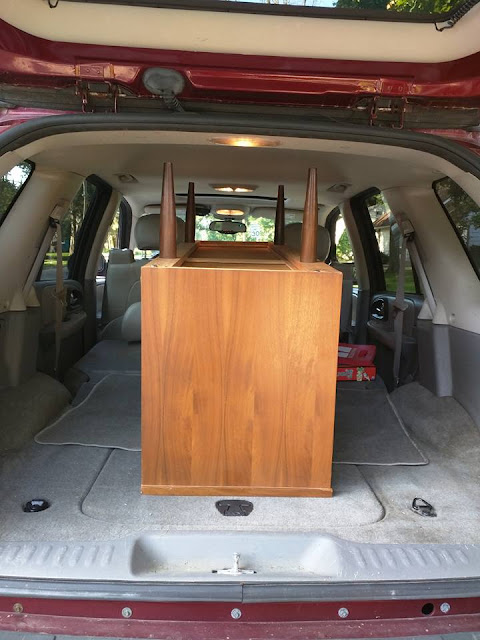 It was the perfect size, the perfect style, and the perfect price point: FREE! Sure, the drawers weren't all the same size, and there was some damage from a previously attached mirror, but other than that, it was in pristine condition compared to others I'd seen listed for $60+ on Craigslist. 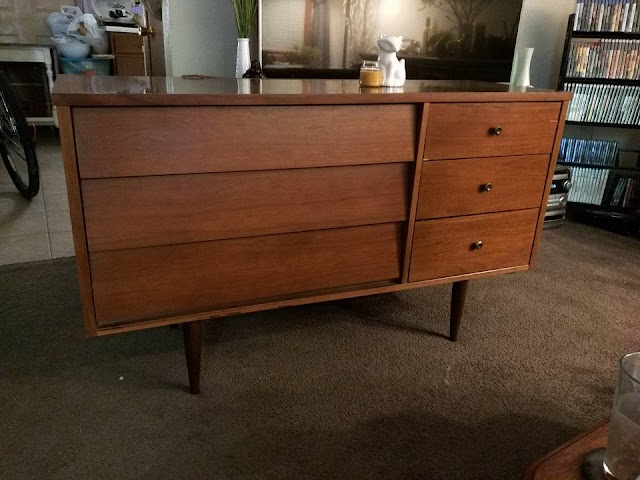 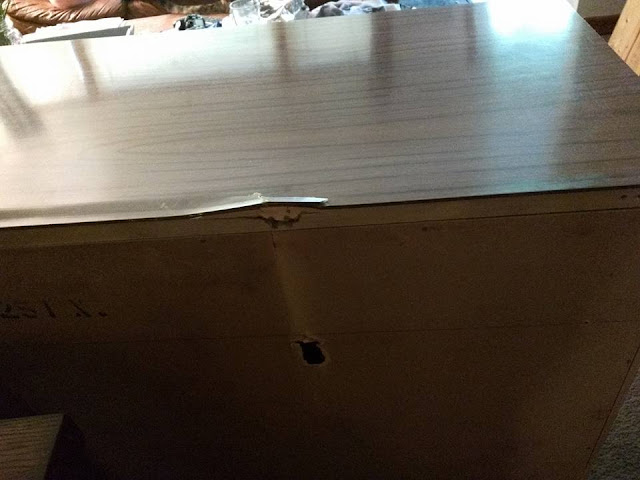 It looks to me like the mirror just got too heavy for the piece after 60+ years, and fell forward, causing the thin backing to tear, and the back laminate to crack. Oopsies. Very easily hidden though, so no worries! 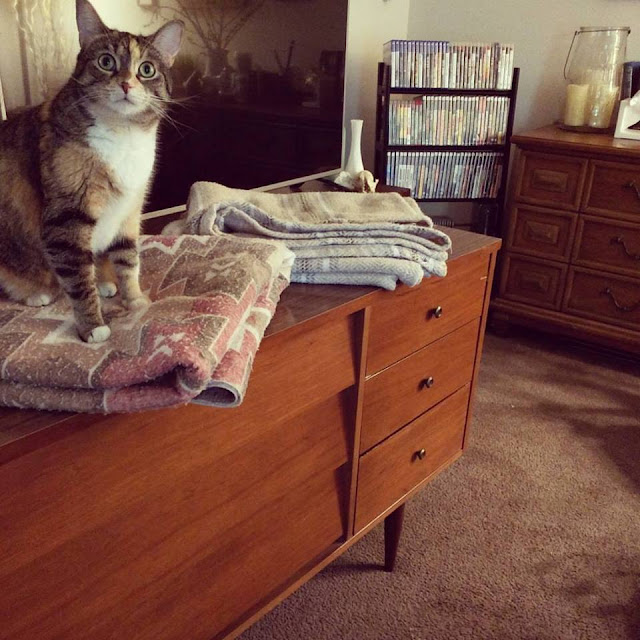 Clearly Sarabi is in disbelief about my mad thrifting skills. The only things that cost me anything in that whole pile (including her) were the blankets, and those were only $6 total. I can live with that.

Another piece I worked on for this room was this black vinyl gold flecked nightmare. 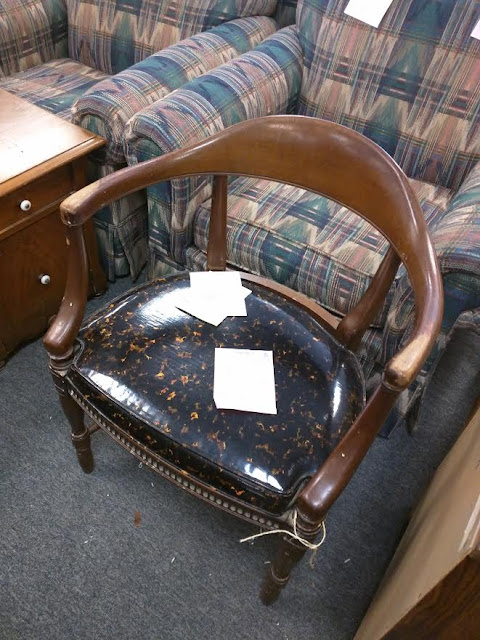 Yuck. Who in their right mind chose that seat? I mean sure, great for easy cleaning, but yeesh. I looked past the ugly, threw it in the storage unit for a few months, and revisited it early this week.

This was seriously the most half-a** project ever. I took the seat off, cleaned the frame, and stapled new fabric over the existing monstrosity. 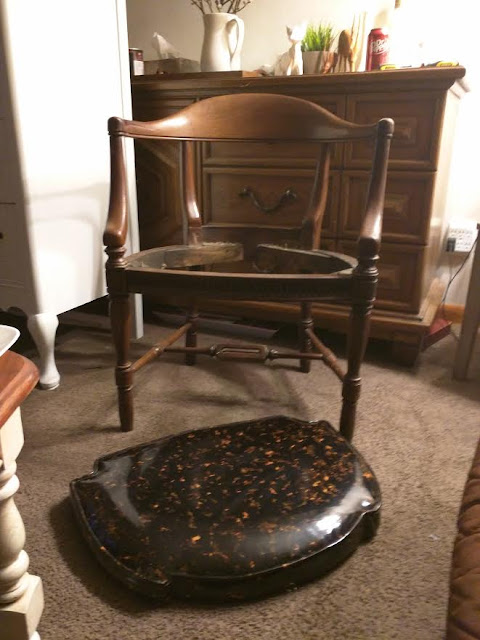 After I popped the seat back on, I called it a day (though I do need to adjust some of the fabric on the front; those wrinkles are making me crazy).

Badda bing, badda boom, there's a new "fat-butt" chair in town. I believe I originally paid around $10 for this, and the fabric I already had, so not too bad for a simple chair! 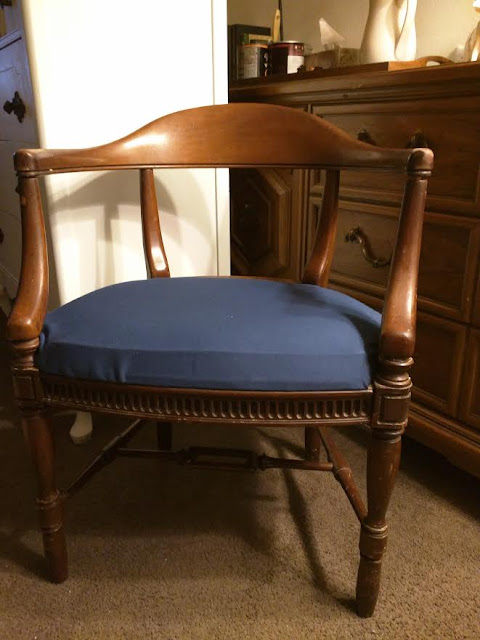 The wood isn't perfect on this piece, there are some wear marks on the tips of the arms, but it adds some depth & character to the piece that would be taken away if I refinished the wood.  It's got a lot of cute little details, and I think it'll look great with a blanket next to my new snake plant.

Did you find anything good in the last couple of weeks while you've been out thrifting? We'd love to see your pieces!