This week has been full blown crazy. But now that it's all over, we have a chance to relax & get other things taken care of! 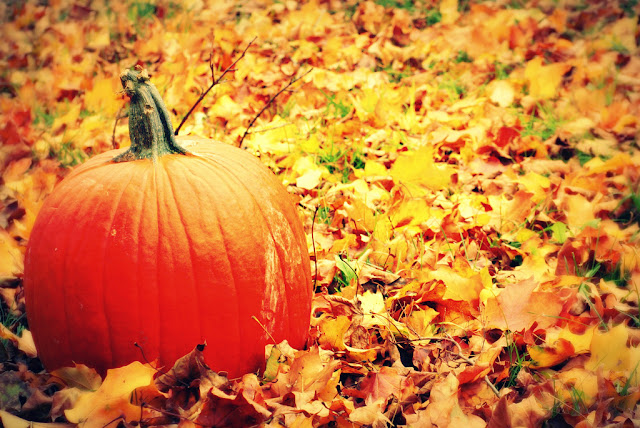 With cooler weather rapidly approaching, I am going to be working double-time to get projects done outdoors. Think stripping, sanding, and painting. I don't have many of these projects left, but the ones I do have need to be done quickly. So here's the current plan.

If you've been following along on Facebook, you may have seen that I got a few new pieces for free from a family friend. One of these pieces in particular needs a refresh, and I have just the idea for it. 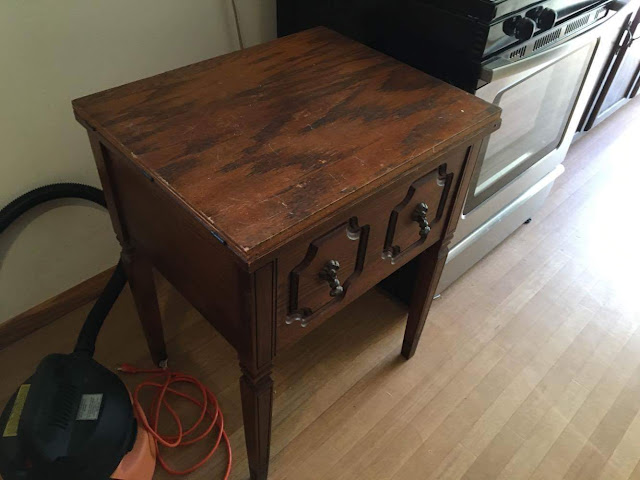 This little sewing machine table has a new purpose in store for it. When I received it, the sewing machine had been removed, but the compartment was still there and fully usable. I'm thinking of making this a serving station, much like the ones I've seen on Pinterest.

During the holidays, it's always a struggle to get all of the food out and ready with our limited counter space, so this little compact flip top will be perfect! The compartment will be able to hold a small cooler with drinks in it, too.

Check out my inspiration (mine will most likely be a more neutral color): 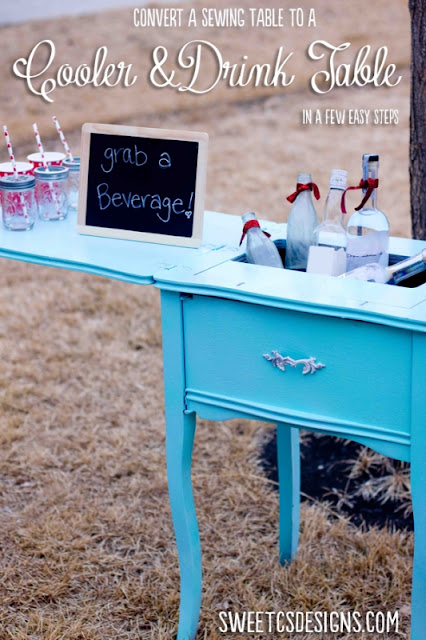 I also received two of these awesome little side tables, which just need a good cleaning in my opinion. I like the authenticity of the scratches and wear marks on these; it really brings out the character & age of them. And those little wire sides? To die for. These will most likely be put to use to most during the holidays, when furniture is moved out to make room for the tree & we need a place for our lamps & drinks. 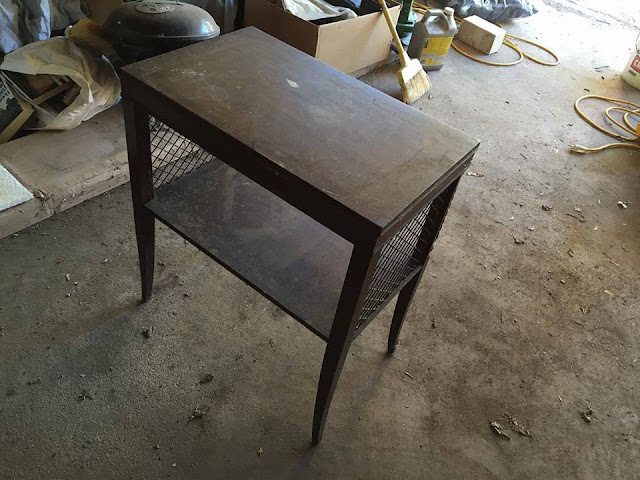 Last but certainly not least from this particular haul was this little teeny bookshelf. It has beautiful details along the front corners, and a precious little "backsplash." 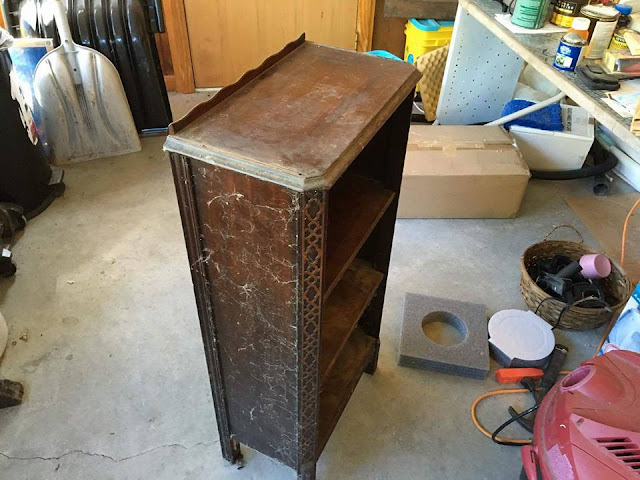 After a good scrub-down & vacuuming, this little guy became the perfect storage solution for our towels. The closets in our apartment have always left them smelling like moth balls & old wood, which isn't what you want on your face after it's freshly washed. This will allow plenty of air flow, so no musty gross smell anymore!

It's in a really awkward place to photograph, but I swear it looks cuter in person. 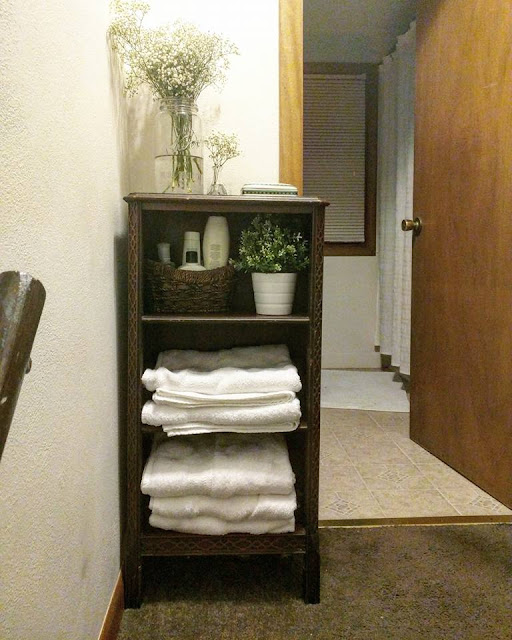 In other news, I did another small round of purging yesterday, and while it's not super easy to tell in our basement right now, I actually got rid of quite a bit. People came by and picked everything up from the curb within a half hour (and it wasn't even garbage day)!

It felt good to get things out of the house, and to help the lady who ended up taking them (she's new in town from Boston, & needed most of what I put out there for their new apartment). 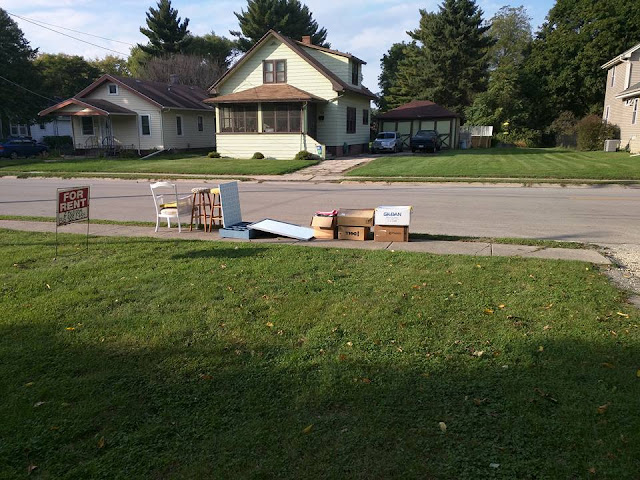 Another thing I had to do this week was organize and store all of the reusable pieces from Allie's wedding (more on that when we get the pictures back from her photographer). Not the hardest task in the world, but man was there a lot more than I thought. Now it's pretty much all tucked away in labelled boxes waiting to be used again later.

Another thing tucked away, waiting to be used later, is this green couch that I got for a screaming deal of $25. It's an old MCM Kroehler built couch, currently waiting for me to finish arranging our house so it can make its way in to have butts on it. And for those of you that aren't familiar with the brand, check out what their vintage furniture goes for these days. It's an intense market.

It's in excellent condition, and if it weren't for some wear on the cushion corner & the fact that I had to tear the dust cover off of it, I'd be tempted to say like-new condition. The cushions haven't been broken in, and for being a 50-60 year old couch, I'd say that's pretty impressive.

And they did have the matching armchair, but it had a little too much wear and tear for $20 and no plan for it. 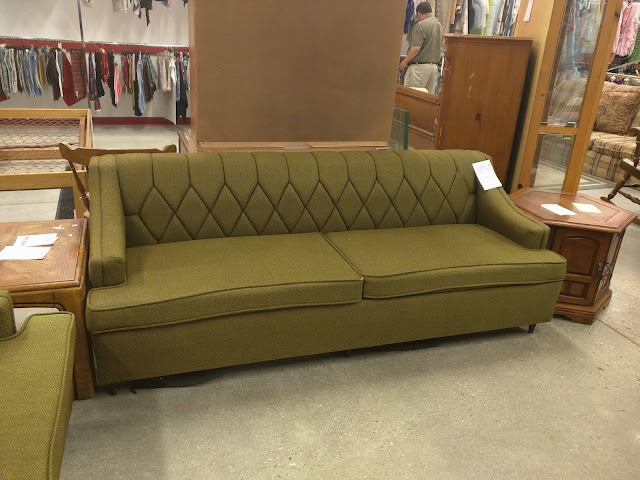 It's not my favorite color for such a big piece, but it's comfortable, it's large, and it's sturdy in the style I like. And honestly, I don't mind the color overall; it reminds me of my Great Grandma, so it has a soft spot in my heart. With a neutral color scheme & a throw blanket, it'll fit right into the office. Now it's just a matter of moving the futon all the way back downstairs at some point.....