Well, I think we can all say it's been one hell of a hot minute since I've been on here... and I'm not making any promises that I'll be on here more frequently than I have been.
Writing these posts takes a lot of time that I usually just don't have to dedicate when I already am engaged in other platforms so much, mainly Instagram (you can always stay up-to-date over there). I can't tell you how many drafted posts I have hanging out in here waiting for me to have the energy to finish them (who knows, this could end up adding to that collection lol). 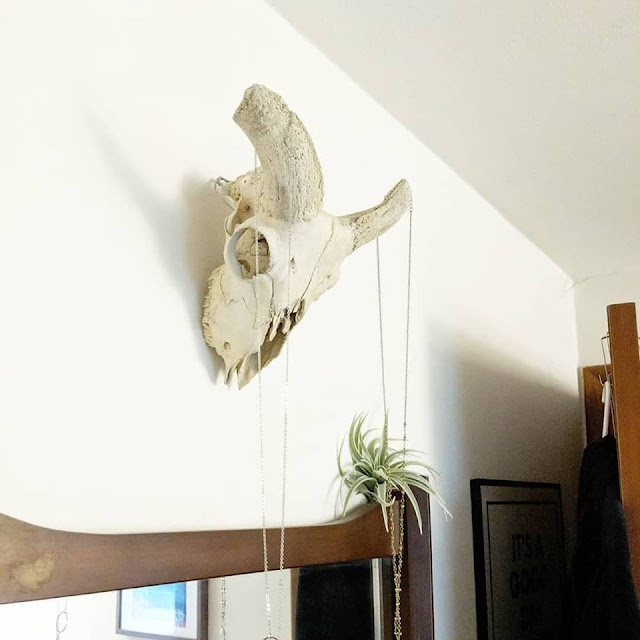 I've been working on this for the past few months, really hitting it hard. And no, I'm not doing it because of Marie Kondo. Her show came after I had already made a few hundred bucks selling furniture (like these rattan swivel chairs I had grandiose plans for that would probably never come to fruition). That isn't to say that I didn't watch all of the episodes in one day or that I think she's doing it all wrong; it's just to say I'm not crediting her for what I took on by myself (and let's just acknowledge that I haven't even touched my clothes and thanked them before donating them).

So far I've sold these four patio chairs, three rattan rocker swivel chairs, two rattan tables (end and coffee), two mid century lounge chairs, a pair of mid century lamps, some artwork, some decor, and it's been great. And I'm still going through things to sell/donate, so there will be more where that came from. It's nice to have a little bit of "mad money" outside of my budget spreadsheet so I can go to a last minute dinner/drinks invite or buy myself something nicer without feeling guilty. It's been a while since I could do that, so this has enough benefits that I'm going to keep on keeping on. 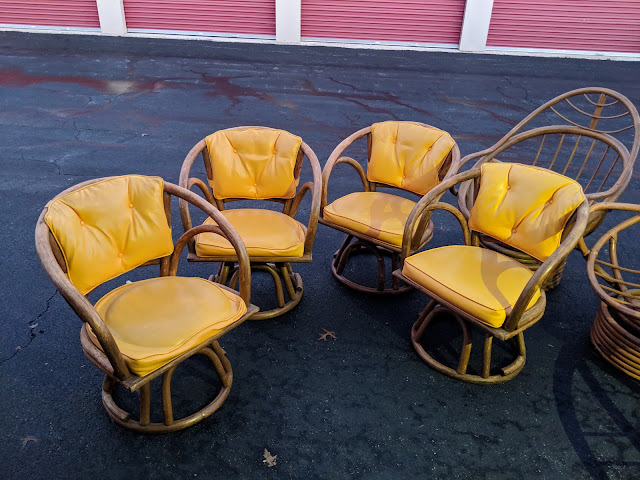 It's a mess...all of the time. The can shelves are attached to the wall covering our HVAC system, and while they're helpful, they also can only hold cans; even then, some cans are too wide or fat to fit on them, and we can't adjust the height of any of them, since someone permanently attached the shelves & left a ton of empty slots with no extra shelves. Bummer.

I've also noticed that all other apartments in our building have shelves in the tall narrow space next to the HVAC; why we don't have them, I'm not sure, but I intend to change that this year.
I plan on using some basic wire shelving that I can attach to the back wall so that we can move and adjust the shelf heights as needed according to what types of boxes/bags/cans/etc we are storing.
I also plan on installing a few hooks on the inside of the door to hold our cleaning tools out of the way, but easily accessible.
This project should come in at under $75, so it's something I would like to tackle on early so that we can enjoy the benefits through the rest of the year.

My current set up isn't working. While I love the pigeonhole desk and the way it looks, the function is now lacking for me. It was great when I was working from my laptop, or just needed to quick sort through the mail, but now that I have a desktop computer, I'd really like a larger work space.

Some extra surface area also means that I'll no longer be sorting my bills and other paperwork in piles on the floor for an hour, since I'll have all the space I need on the desk. I've looked online at other closet work spaces & floating desks, and they can look really sharp. This project also looks like it'll be fairly affordable, under $100 hopefully, so I plan on tackling that before spring as well. 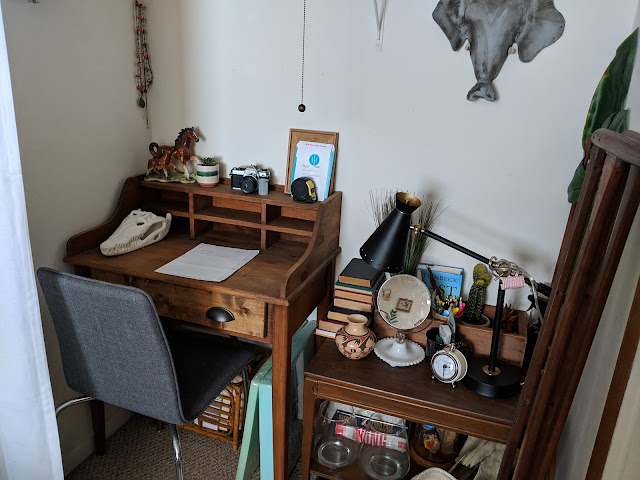 This year, I'm really hoping to focus on myself & my own personal goals, rather than dedicating myself and my time to fuel or root for everyone else around me 24/7. Last year really had some defining moments that made me realize how much I've put myself on the back burner in favor of everyone else, so I'm trying to take the reins back and steer myself in the right direction for me.
I'm trying to learn that saying "no" is ok; it doesn't mean that I'm being a crappy friend by taking care of myself sometimes. The better care I take care of myself, the more likely I'll be the best version of myself when I do say "yes."

I'll be working on finances more (so keep a look out for budget friendly tips & projects), my own health (no more seizures, please), and doing things that I love or am interested in, regardless of anyone else's opinions on it. I'm an adult that has every capability to do things alone, but I've allowed the lack of company to make final decisions for me when it comes to events I'd like to attend, stores I'd like to explore, and restaurants I'd like to sample; no more of that nonsense, I'll take myself out on a date.

And speaking of just doing things alone, I've really avoided working out and getting healthier by saying I'd rather do it with someone. I'm pretty sure that's a lie, because I don't want anyone around me when I'm getting disgustingly sweaty and red in the face, soooooo.... I should just start working on that too and not try to blame being companionless for my lack of motivation. Plus, I mean, Carl is always down to go for a walk, so I don't really have an excuse to not at least do that. Except for the northern Illinois weather that includes below freezing temps and freezing rain and such... but that's what I have an elliptical for, right? Right. 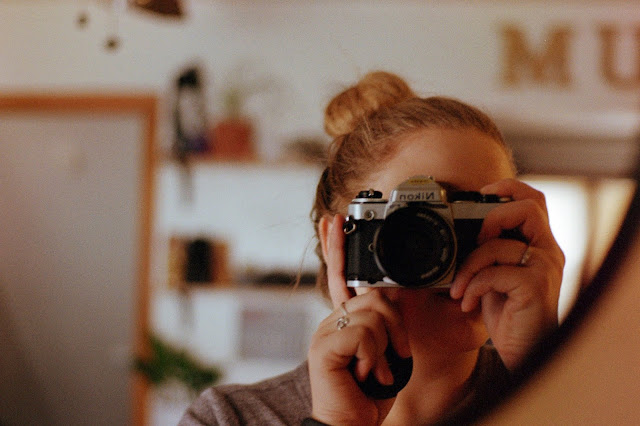 I'm already registered for a ceramics class with Aaron beginning in February, but there are other creative outlets I'd like to further explore. I'd like to learn more about furniture restoration, get back to sewing occasionally (even more reason for that big desk!), and really focus (no pun intended) on learning more about photography, both film & digital. I recently had my first roll of 35mm developed from a vintage Nikon, so I hope to keep playing with that & learning more.

The house is almost completely done in the sense that it reflects who we are as a household. While Aaron doesn't care what I do about 90% of the time, I do make sure there are injections here and there of him. The living room has his gaming things & musical elements, the bathroom will remain painted in the color he chose, our bedroom has the sticky glow-in-the-dark stars above our bed, etc. Soon he'll have an opportunity to use the office as a place to play games on the desktop computer if he so desires (though I doubt it meets his standards for gaming).
But there are still little things here and there that I'd like to work on, such as storage and de-cluttering some areas that just have too much "stuff" that I've purchased.

I also wouldn't mind really honing in on what I'd like my wardrobe to look like. I want to represent myself exactly how I feel I am. Right now, I'm having to wear funeral home clothes 40+ hours a week, so it's kind of hard to show my personality in my attire; I'd like to find a better way to do it than just swapping out my jewelry and what color shirt I feel like wearing that day. I'm also hoping to inject more fun vibes into my weekend wear (don't worry, I'll still be rocking the yoga pants when I'm at home but in public? Not so much). 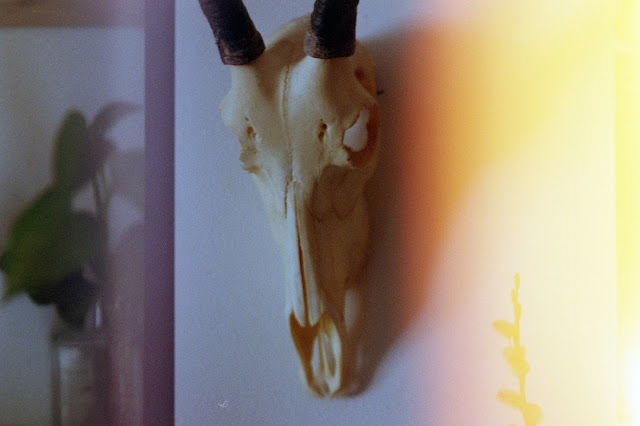 So that's what there is to look forward to this year! Any personal goals that you have set for yourself?