Let me tell you. Sometimes I really hate my hobby. Sometimes I curse (a lot, very loudly), think about quitting and just curbing the piece. Last year, working on this Dixie dresser, was definitely one of those times.
I'm glad I didn't. 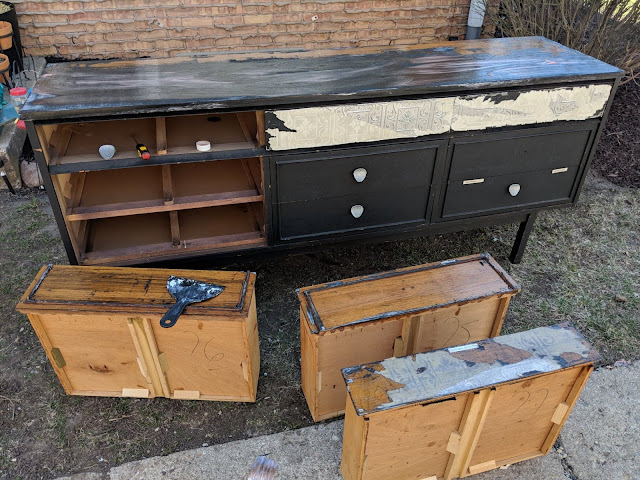 First off, let's talk about the piece I was supposed to be getting, but that was sold out from under me, resulting in the booby prize I wanted to destroy several times. 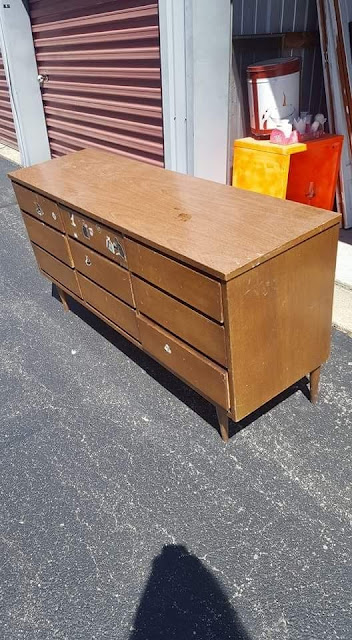 Everything about this piece was perfect. Clean lines, cute legs, and in hindsight, no hardware (what ended up being the bane of my existence, and earning the next piece the "from Hell" title). 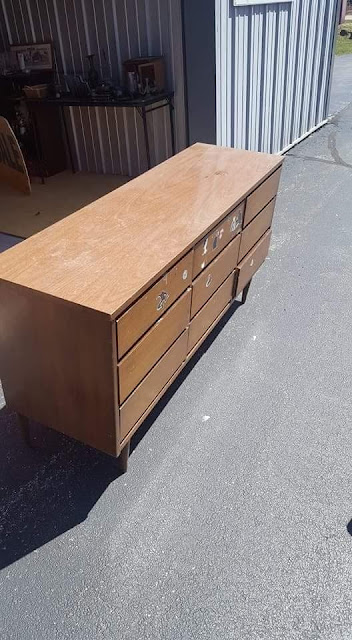 Instead of honoring our deal for me to pay her almost double what she was asking for this piece, she notified me an hour before pickup that someone came and bought it.
Furious doesn't even begin to cover it, dude. She tried to smooth it over by offering this piece for $25. It wasn't what I wanted, but I figured it'd be relatively easy to make work after that wallpaper & paint got stripped of and I could return it to it's former glory. 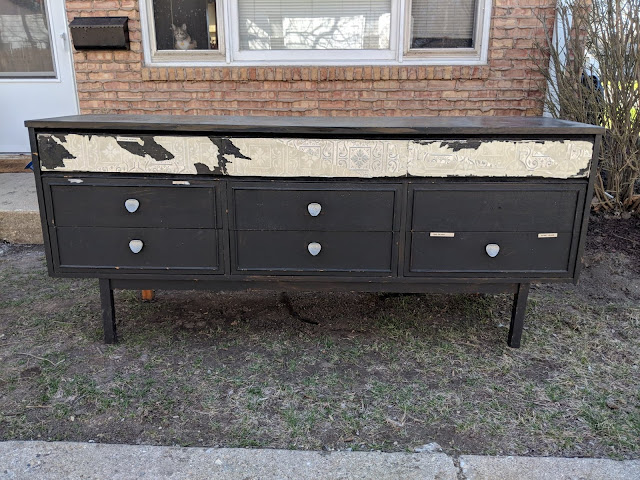 I agreed (sight unseen), had a family member pick it up for me, and then assessed. 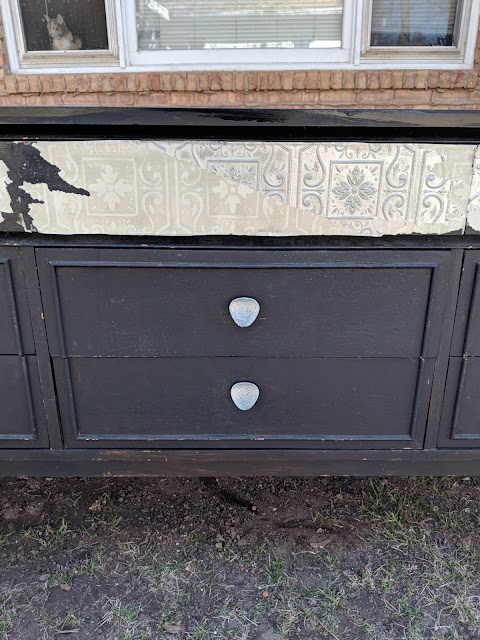 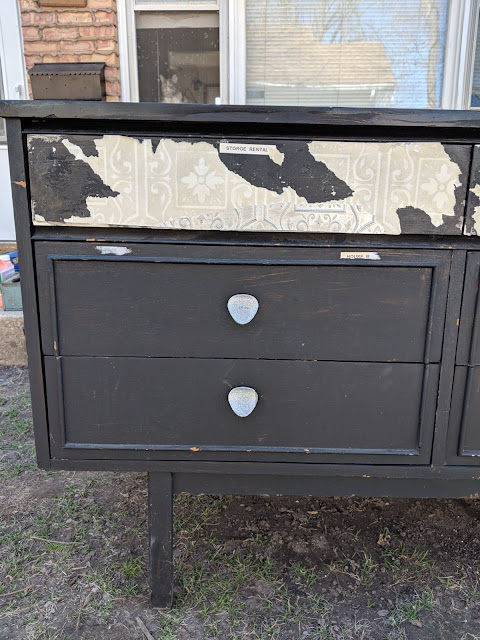 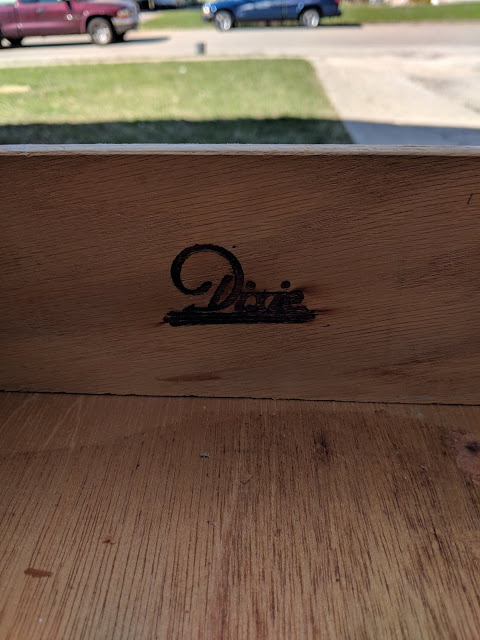 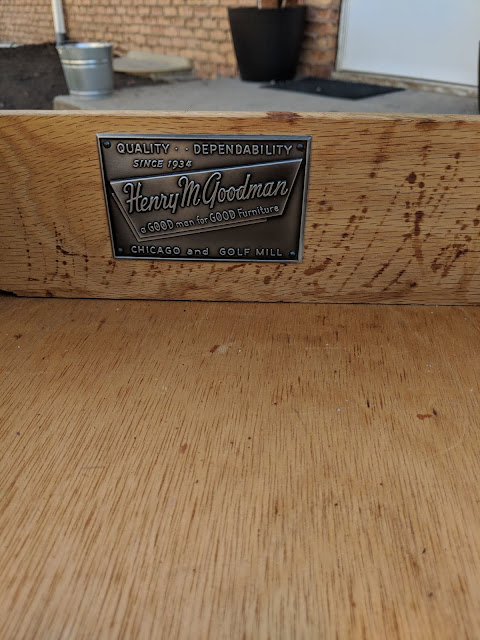 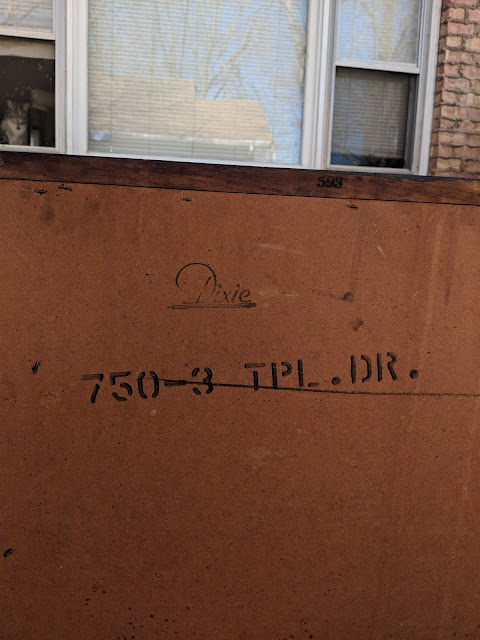 Then came the work. I'll spare you a heartfelt rant, but I'll tell you I spent 23 working hours on this thing in the course of two months doing the following: 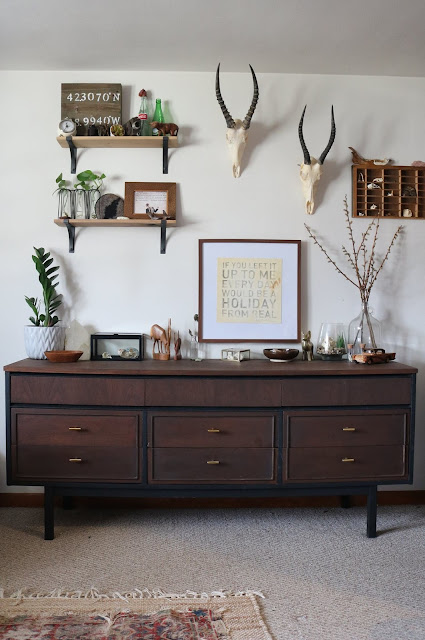 What I ended up with was this beast. I didn't enjoy it at first, but once it was in place in the house, it really started to make sense and it has grown on me. Originally, this was supposed to end up in our bedroom, but knowing how long it was (and seeing how much the end result would not match our room), I decided to swap it with the Lane Rhythm dresser in Carl's room (hence the slobber spots on the front).
It matches his room's vibe much better, and provides good storage for office supplies, picture frames & décor that are "out of rotation," and any other loose items that don't have a set place at the moment. In no way is it perfect, but it's much better off & finally getting use.

In the past year that it's been in his room, we've had some dings and scrapes happen, so eventually when we move to another house, I'll repair the small issues & seal her back up. But for now, there's no way in hell I'm moving it back down those stairs and around the curve just to sand out some minor issues people have created by not paying attention or animals being dopey.

There are several dings from us getting it up the stairs in the first place, some serious scrapes from the bottom of a wine bottle being turned around and around on the wood as someone tried to use a corkscrew the wrong way (and subsequently making me want to rip my hair out), it's definitely suffered from some lack of coasters in spots (also makes me want to scream), Carl's big head runs into the sides every once in a while & I swear his slobber is nothing but acid, and kitty claws as they clamor up onto it to avoid Carl's big head...etc.
It sure isn't perfect, but it's mine, it's done, and it's good enough for the time being. 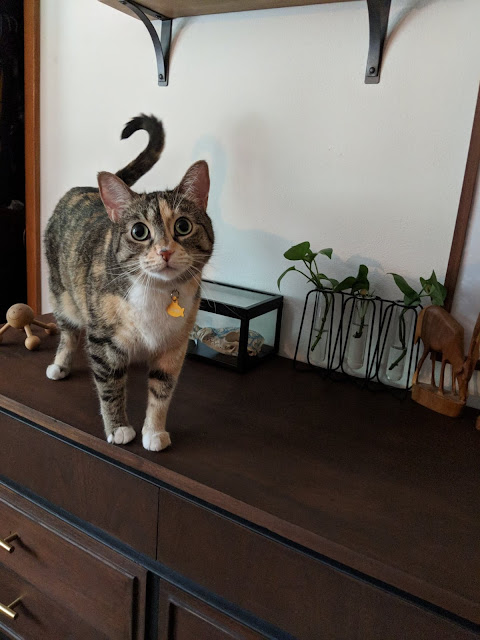 I know what you're thinking...
Why isn't the "total cost for me" $106 (cost of supplies)?
Well, because I already had a lot of things on hand in my personal stash. I'd have to replace those things if I was using them for a "client" or "buyer." Since this was a personal piece, those supplies don't affect my cost; they'll be replaced when I need more for another personal project.
Long story short: I only had to pay for the dresser, hardware, nuts/bolts, paint, and new sander parts.

What people don't understand is the time, the skill, the planning, and the true cost of doing these things...and even if they do claim to understand it, they don't respect it & will offer much less. I can guarantee I'd get someone trying to offer me $50 for this piece if I tried to sell it. That's simply not happening.
What's more is that there isn't really a market out here for this type of furniture. People in our area would rather buy a $150 Target dresser and replace it every two years for the rest of eternity. They don't see the value in dovetail construction or in sturdy vintage pieces that have lived longer than they have. And if they do recognize the value, they often cannot afford it.
For my own personal purposes, that's excellent; more furniture for my house & my collection. But it's also why I do not sell what I refinish, and why I don't do a project without a plan as to how I would use it. 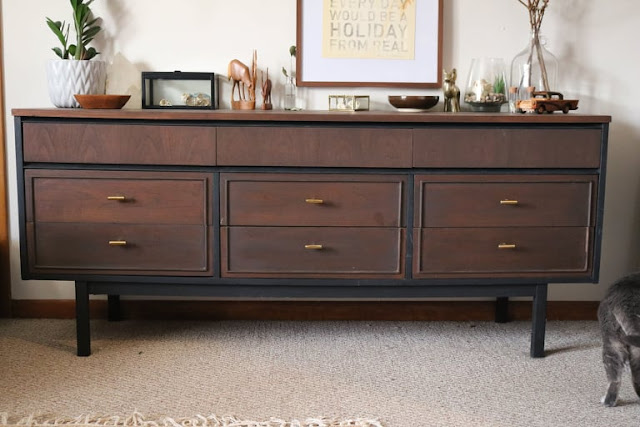 So for now, this is going to be a "fun" thing for me. There's also something to be said about doing things the way I like, and not having instruction from someone that's paying me. After all, it does become work on occasions like that, and often times, that alone makes it unappealing and (quite frankly) unenjoyable.

So for now, don't ask me to paint/stain/refinish your furniture unless you want me to do it my way, and I won't charge you what you may think of as an obscene amount ;)